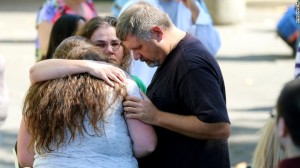 once again your image

in time of tragedy.

a pawn of the public.

will have their way.

They are at home

and their precious guns.

has no common sense.

Death is a way of life

the shooter didn’t get them.

to the gun nuts.

and hope that you

caught in the cross hairs.

Then you and I will have

I've written off and on my entire life. It took years for me to finally take putting words together seriously. Now it's not, nor does it ever feel, like work. Writing daily has become habitual. No day is complete without words having appeared on the page.
View all posts by John White »